Blu Emu was resting on her laurels, or at least her hulls, in Saint Martin (abbreviated incidentally as SXM for some reason) in the Caribbean. Peters and May, who happen to be an international shipping company and not, as it appears, a Sydney clothing store or firm of slightly dodgy lawyers, needed the boat in Antigua. Antigua (with a much more boring abbreviation of ANT, although somewhat sort after as an Internet location by the Providers Internationale Soft Suede), was only about 100 nautical miles away as the pirates fly but that was a long long way when you are sitting in Australia wondering how your boat is going to get there!

Fortunately, we made contact with a Captain – yes, the capitalised honorific was appropriate – Greg who had skippered our new boat in previous times for the likes of the National Geographic while whale filming, and the Death In Paradise crew for episode 1, series 5. I’m not sure how the boat felt about being the “millionaire’s yacht” but she carried out her role with quiet aplomb worthy of aluminium. Stoic perhaps, or even Metallic.

Captain Greg agreed to pilot her on her last (for now!) Caribbean escapade to Antigua, righting all the wrongs that could be fixed and providing a manual simple enough for even idiots (that’s us folks, although it is less idiocy that lack of experience). He even said that he was going to buy her if we had not already done so, such was his love of her. Our trust and hope built high, bedded even more when we found that his family happened to own an entire island in Guadeloupe and was thus less than likely to “do a runner”. 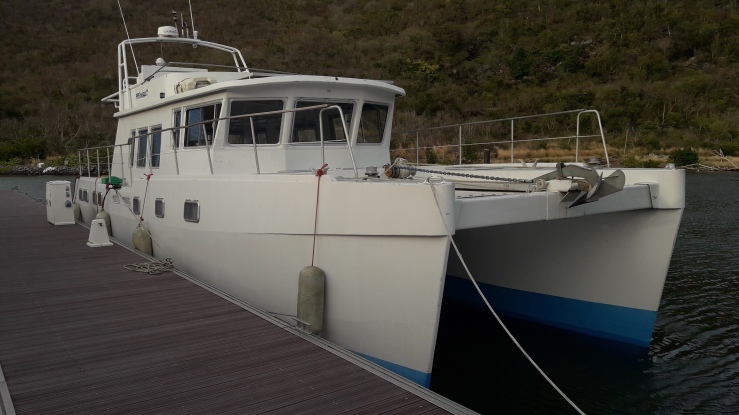 Prepared, victualled (look it up… did you find it means buying food and water for a voyage?) and with a zarpe she was ready. I’m pretty sure you had to lookup “zarpe” too. Google fortunately provides us with a clear explanation:

Such is the wonder of information on the Internet… A zarpe is a customs clearance for vessels. You clear out of one country and receive a zarpe, and you must provide it to the next country you enter as proof of where you have just been and that you cleared out correctly, rather than clearing out quickly such as when being chased by irate husbands (wives are never irate of course… remember the honeymoon!).

After some tribulations, like a leaking shaft seal and 30kn and 3m swells, she arrived in Antigua and joined the Peters and May hired Zea Bremen. Modern ships have something called AIS, or Automatic Identification System, which allows anyone to track larger vessels throughout the world. You can see where Zea Bremen is right now if you want.

Lifted aboard, they kindly gave her the entire hold to herself, while the other 15 boats had to endure the “outside” above her.

View all posts by robout